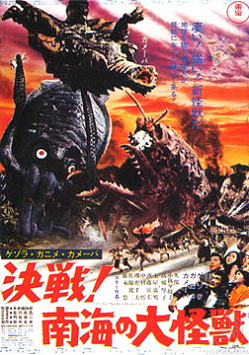 Space Amoeba, also known in the United States as Yog, Monster From Space, is a 1970 Kaiju film produced by Toho. The film was directed by Ishiro Honda, with music by Akira Ifukube, and special effects by Teruyoshi Nakano. Because the crash of the Japanese film industry was just beginning, the budget was still higher than most of the later films in the 1970's, meaning that Nakano actually had something to work with, although it wasn't as high as previous SFX films.

The film's plot concerns a strange entity from space hitching a ride on the recently launched Helios 7 rocket, causing it to fall back to Earth after four months in the South Pacific, near an island that is being developed for tourism by the Asia Development Corporation, called Selgio Island. The strange entity (which shall be called Yog) first infects an abnormally gigantic cuttlefish, called Gezora. During this time, a group of people, including a photographer named Taro Kudo (played by Akira Kubo), an employee of the Asia Development Corporation (ADC) named Ayaka Hoshino (Atsuko Takahashi), a professor named Kyoichi Miya (Yoshio Tsuchiya), and a traveler named Makoto Obata (Kenji Sahara), have come to visit the island. After they arrive, Gezora makes a few appearances and kills many people, including another agent of the ADC. The natives of the island blame the company for rosuing Gezora's ire. After Gezora's latest attack, Obata is caught searching for documents belonging to the ADC, and is then revealed to be an industrial spy. After Kudo and Miya investigate the local waters, finding the remains of the Helios 7 rocket. Gezora attacks them, but is driven away by a group of dolphins. Gezora makes landfall again, destroying a village. During this attack, Gezora's weakness to fire is discovered, and the monster is subsequently burned to death.

Unfortunately, this is not the end of Yog/Amoeba who soon finds another host in the form of a crab, creating the monster Ganimes in the process. Later that night, Ganimes attacks the island, but is soon defeated after being shot in the eyes by a rifle. Yog/Amoeba is still not dead, and so it divides itself to control another crab (creating yet a second Ganimes) and a matamata turtle called Kamoebas. After a comatose native is brought out of shock and reveals that during one of Gezora's attacks, the monster was driven away by bats. Finding a connection between the bats and the dolphins that had saved them before, Miya realizes that supersonic waves are another weakness of the Amoeba. However, Obata has been found and controlled by the Amoeba, and he soon sabotages a plan to use bats against the rampaging monsters. However, Yog's control over Obata is very weak, and he soon fixes his mistake and allows the bats to do their job just fine when they confuse the two rampaging monsters and cause them to attack one another in a duel to the death. The two monsters take their fight to a volcano, which erupts, engulfing the giant beasts. Obata, knowing that he carries the last of the Amoeba inside of himself, jumps into the inferno, ending Yog's reign of terror.