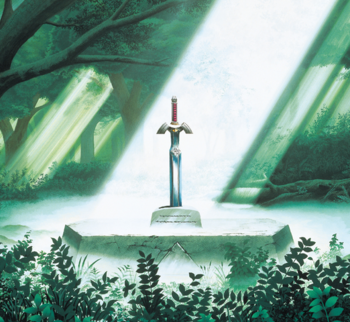 You can already tell the Master Sword is significant because of this.
Advertisement:

In a nutshell, this is using sunlight as though it was a stage spotlight.

Spotlights in theater are often used to highlight a specific thing the play wants the audience to focus on. Thus the other lights are turned off so only what's in the spotlight can be seen.

In media that isn't on stage, even animated media, that isn't an option outside of stylistic works. Other ways have to be found to highlight things. This trope is when light streaming through things, like through windows or tree branches, is used to highlight something relevant. Heck, sometimes there doesn't even have to be something making the sunlight act like that. It just makes the slits on its own.

Usually it's something key to the plot, often of a supernatural nature. The latter sort of justifies this trope, but it's not the only form this trope takes.

Quite common in some Western religious artwork.

Note this can only be when it's used as a substitute for a spotlight. If sunlight is actually used in the story to highlight something, like killing Dracula or finding the location of the Ark of the Covenant, it's not this trope.

A Sub-Trope of Dramatic Spotlight.

A Sister Trope to Rays from Heaven (where the light is symbolic instead of highlighting), Lightning Reveal.

Compare Notice This, Rule of Perception, Rule of Symbolism, Emerging from the Shadows. May involve Cue the Sun.