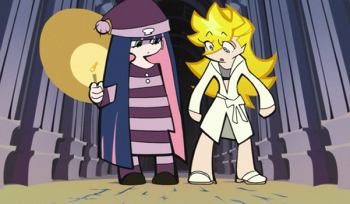 "That match sure lit up the room!"
"A single match is always enough to magically light up a room bigger than the Colosseum."
— Hollywood Rule Book, Vanity Fair (April 2002)

All the light sources are either broken, out of energy, out of fuel (includes wax) or simply not there. The scene is illuminated by a single light. This can be a flashlight or electric lantern, but is usually a lighter, a candle or a matchstick. And yet, despite the tiny size and almost insignificant lumen output of the thing, everything looks as if the light was powered by a nuclear reaction. Rooms, even quite large ones, will be lit up to almost daylight level.

If the light source isn't infinite and the matchstick is depleted, or the battery/fuel runs out, the light extinguishes and everything is suddenly pitch black. Cue the monsters, traps or sentimental/sexual plot twist.

Compare Absurdly Bright Light. Also see Hollywood Darkness, where the ostensible light source is either natural or completely inexplicable... And usually blue. Often appears in the same context as (and immediately after) By the Lights of Their Eyes – it wouldn't be much of a Reveal if a darkness-shrouded monster stayed darkness-shrouded after the candle was lit.

Contrast Chiaroscuro, where everything looks like it was actually lit by a real candle.