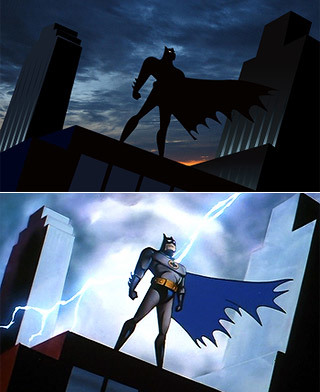 I am Vengeance, I am The Night. I. AM. Batman!
Advertisement:

It's a dark and stormy night. The main character(s) are surrounded by darkness. A sense of foreboding wavers in the air, and the tension is so thick, a knife isn't fit to cut it, and you would instead require a heavy-duty chainsaw.

This is the perfect concoction for the Empathic Environment to whip up a good old Lightning Reveal. There's something sinister lurking in the shadows that the character(s) and perhaps audience is unaware of until lightning strikes. In that flash of lightning something is revealed hence, well, the Lightning Reveal.

Bonus points if the flash is so quick, the audience/characters are unsure if they saw anything at all.