Lights Off, Somebody Dies 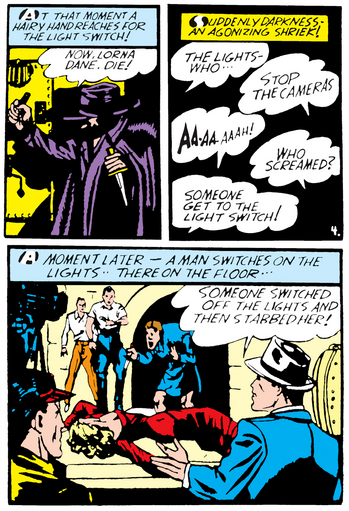 Detective: Now, we'll reconstruct the crime. I'll sit down here, Constable you turn out the lights.
<lights go out>
Detective: Good. Now then, there was a scream, <screams>, and then, just before the lights went up, there was a shot.
<Gunshot sound effect. The lights come on, revealing the detective dead, with an arrow in his neck>
— Monty Python's Flying Circus
Advertisement:

This trope describes the basic situation where a story's characters are attending a Masquerade Ball, a dinner party, or any event with a sizeable amount of people in it, and the lights go out. Usually this is accompanied by screams, chaos and people trying to feel their way through the dark, but, more importantly, as soon as the lights come on someone is found to have been murdered in all of the commotion.

The general reason for this trope is often to establish a mystery where, in the dark, anyone could have done it.

In Real Life, this kind of murder would be very difficult to actually pull off, unless animals are used. The murderer would have to be able to see in the dark, in order to avoid tripping over things or bumping into people. Then they would have to correctly identify the person they want to kill without seeing their face. (This sometimes leads to a plot twist where it turns out that somebody else in the room was actually the murderer's intended victim.) They'd also need to work out how to discreetly get the lights off in the first place — everyone is going to suspect that shady-looking fellow who was hanging around the light switch. Might work more plausibly if the murderer has an accomplice, who waits until the murderer has their target within reach before killing the lights. Best not to think about it too hard.

Compare Darkness Equals Death, where the lights are already off, or Kill the Lights, when the bad guys make the lights go out by some kind of supernatural means.

Mr. Boddy switches the lights off, hoping someone will kill Wadsworth. Doesn't quite work out that way.

Mr. Boddy switches the lights off, hoping someone will kill Wadsworth. Doesn't quite work out that way.