The Pen Is Mightier 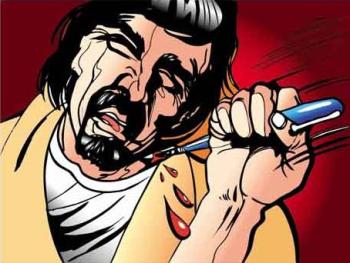 "How about a magic trick? I'm going to make this pencil disappear...TA-DA! It's... Ah, it's gone..."
— The Joker, The Dark Knight
Advertisement:

You know, they weren't joking when they said the pen was mightier than the sword. Or the pencil. Or the paintbrush. In the proper hands any writing tool can become a truly deadly weapon, and earns extra badass points for the user at the same time—especially if used against an opponent with one of those piddling "real" weapons.

Typically, the writing tool will be used as a stabbing weapon, aimed for the head, throat, or chest. Occasionally it may be used as a throwing weapon. The pen or pencil may be used for more than just stabbing however; for example, an inkpen may be used to spray ink in the face of an attacker.

Paint brushes being used to write spells and curses on opponents are common in eastern works; most popular depictions of this are derived from a Chinese folktale

about a boy who could bring paintings to life when he signed them. An evil emperor would force the boy to draw him vast riches and he would instead conjure a dragon or tsunami to kill the emperor, depending on the telling.

Bonus points if, after the pen is used, someone makes a snarky comment on the pen's superiority.

A subtrope of Improvised Weapon. May be used by an Improbable Weapon User, a Combat Pragmatist, an Art Attacker or a Mad Artist.

Not to be confused with The Power of Language, which covers figurative uses of this phrase. Has nothing to do with a certain body part.

Compare Once Killed a Man with a Noodle Implement.