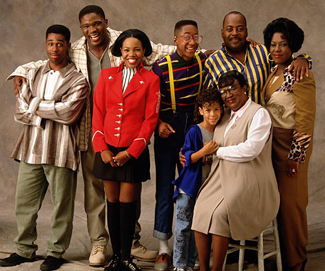 No, it wasn't called "The Urkel Show".note Clockwise from the left: Waldo, Eddie, Laura, Steve Urkel, Carl, Harriette, Mother Winslow, Richie.
"Hi dee ho, Winslows!"
Steve Urkel, almost every episode
It's a rare condition this day and age...
To read any good news on the newspaper page
Love and tradition of the grand design...
Some people say is even harder to find
Well then there must be some magic clue
Inside these gentle walls
Cause all I see is a tower of dreams...
Real love burstin' out of every seam!
- The opening lyrics to "As Days Go By", sung by Jesse Frederick
Advertisement:

Family Matters is a Dom Com that aired from 1989 to 1998. Set in Chicago, it was originally conceived as a spin-off of Perfect Strangers focusing on the deadpan snarking elevator operator Harriet Winslow and her police officer husband Carl, and introducing the rest of their middle-class family. It served as one of the anchors of ABC's TGIF block before moving to CBS in 1997 along with its sister series, Step by Step. It's notable for being one of the most successful shows that features a predominantly African American cast.

Midway through Season 1, the annoying neighbor and Extraverted Nerd Steve Urkel was introduced, intended as a one-shot character revolving around Carl finding a tame guy to take his daughter Laura to a dance. Jaleel White hit the role so enthusiastically that his character went over massively with the live audience attending the episode's taping.note Legend has it that a group of college kids at the taping went as far as to start chanting "Urkel! Urkel!" This was a pleasant surprise for the producers, who quickly signed up White to return as a regular. By the second season, Steve (or "Urkel" as he was often referred to) had become so popular that every episode featured him in a prominent role.

Steve's wackiness and prominence got to the point where he became the go-to example of an Extraverted Nerd. As the show went on, Steve came to dominate it, and more and more episodes revolved around him and his wacky sci-fi inventions.

The Winslows came to be defined by their relationship with Steve: Carl became the father figure, as Steve's own parents were implied to be neglectful at best, the oldest son Eddie was his best friend, Laura was his unrequited love interest, Estelle always recognized his good heart, Richie saw him as an Honorary Uncle, and Harriette kept Carl from killing him. In fact, the youngest daughter, Judy, was phased out because she didn't have much interaction with him.note Jaimee Foxworth stated in one of her Facebook posts that she and Jaleel White didn't really get along.

Sometimes described as a Spiritual Successor of Happy Days, the two shows have many superficial similarities: Both shows had the same production company, and were spinoffs of a popular series. Both are about a married couple with three children living in a Midwestern city. In each series, a minor character introduced as an afterthought quickly becomes wildly popular and dominates the show, one of the three original siblings mysteriously disappears and is never mentioned again, and the person for whom the show was created in the first place eventually leaves it entirely. Both had a local hangout/burger joint which burned down due to carelessness by one of the characters, only to reopen under new management. Both shows originally used an already famous song as the opening theme in the first few episodes, which is later replaced by another song created only for the show.

In 2019, White would reprise his role as Urkel in the animated series, Scooby-Doo and Guess Who?. In 2021, it was announced

he would reprise the role again in an animated film, Did I Do That to the Holidays?: A Steve Urkel Story.