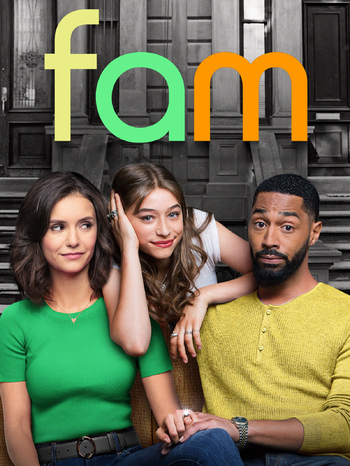 Fam was a 2019 American Sitcom on the CBS Network.

Clem (Nina Dobrev), after an upbringing that left a lot to be desired, has pulled herself up and built a fantastic life—she has a great job, terrific apartment, and an amazing fiancé, Nick (Tone Bell), a college professor from a well-to-do "normal" family. Nick's warm and supportive parents, Rose (Sheryl Lee Ralph) and Walt (Brian Stokes Mitchell), embrace Clem and complete the family she always wanted.

But when Clem’s wild-child half-sister, Shannon (Odessa Adlon), appears on their doorstep to escape their train wreck of a dad, homicide detective Freddy (Gary Cole), Nick agrees that Clem can help her avoid all the mistakes she made, and they invite her to move in. As the family Clem chose and the family she has blend, Clem realizes that this happy fam may be the perfection she's been seeking.

After airing 13 episodes with decent-but-not-spectacular ratings, CBS announced in May of 2019 that it would not renew the show.