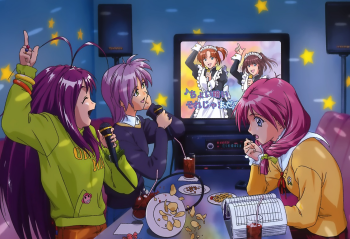 Hori: What kind of plots can you base around karaoke?
Nozaki: Senpai...In shoujo manga, karaoke parties are parties where everyone can make lots of noise. And it's a chance to showcase appealing gaps in the characters' personalities! A quiet girl who knows all the words to a song! A flashy guy who only sings enka! A delinquent who falls asleep as soon as it's dark!!
— Monthly Girls' Nozaki-kun
Advertisement:

A popular pastime in Japan (and as noted later, much of Asia), karaoke is the group activity of singing popular songs into a microphone, accompanied by a recording of the song from which the original vocals have been removed, and helped by lyrics displayed on a television. The singer is typically graded by the karaoke program (and by onlookers) for his or her ability to match the original song. The activity has spread from Japan to many other nations, and home equipment and song versions are readily available. note The really weird thing is that the idea of karaoke, and a prototype system, was first devised in Stockport, England but sank into obscurity in a wave of utter indifference. If only the originator had thought to patent the idea and got better marketing, "Roy's Singalong Machine

For people who don't own the equipment or want to sing karaoke as part of a fun night out, a karaoke box is an establishment that rents private rooms with karaoke equipment on the basis of short time intervals. Food and drink can be ordered and delivered to the room. Often they are part of a karaoke bar. Many karaoke boxes offer the option of nomi-houdai which translates to "all you can drink" and is the exact opposite of "responsible drinking", as it involves you drinking as much alcohol as possible in two or three hours to make the most of your yen.

Patrons of a karaoke box need only worry about embarrassing themselves in front of their closest friends rather than in front of a bar full of strangers.

For the unfortunates who have missed the last train home (or young folks traveling on a shoestring budget), a karaoke box is an acceptable and inexpensive place to spend the night, as many are open 24 hours, charge a minimal hourly rate, are nicely sound-insulated, and have staff who keep the place safe and really don't care whether you sing, drink, or sleep.

Compare Karaoke Bonding Scene, where two characters do a karaoke performance that hints at their relationship.