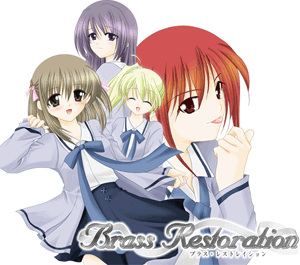 Brass Restoration is a Doujin Visual Novel about a high school student named Ryo Takiguchi. At the start of the story he's following in his dead father's footsteps as an exceptional drummer, but that changes quickly in the prologue when he loses his left arm in a train accident.
Advertisement:

The main story starts a few months later when he's released from the hospital. It deals with Ryo's struggles to come to terms with the fact that he can no longer be a world-class drummer, and tries to decide if he loves the heroine that the player has chosen. The player has a choice between four main heroines:

The other characters include Tsubomi, Minori's younger sister; Koutarou, Ryo's good (male) friend; and Yukino, the teacher in charge of the music club.

This VN deals with serious themes and important and powerful choices, but is tempered with a good dose of silly humor. The art is quite good, the writing is decent, and the music is a fitting set of simple piano pieces.

This Visual Novel provides examples of: