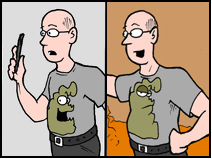 A character is wearing a piece of clothing, often a T-Shirt, which will have some phrase or logo on it that will alter for no explainable reason, so as to fit the mood or feeling of the person wearing. Presumably since these thoughts and emotions are so close to their heart that they rub off on a nearby surface.

Sometimes, the character's mood will spread to another close-by accessory or element.

A Sub-Trope of Expressive Accessory. Related to Talking with Signs. Compare Fun T-Shirt.