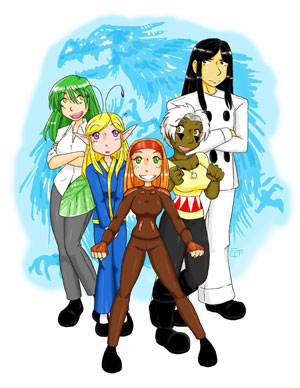 The doctors as drawn by Kittyhawk. From left: Sarin the wizard, Aki (their nurse), Goro the surgeon, Kili the shaman, and Mori, the scientist and leader.
"Well, I can tell you that a long life need not be a boring one. Everyone's always changing. And I don't just mean physically, though there's been a lot of that going around lately."
— Mori, here

is a transformation Webcomic about four "magical doctors" touted as the best in their respective fields, who have banded together to do good and solve medical mysteries. Consisting of a whimsical shapeshifting wizard, a grim magic-assisted surgeon, a thoughtful "magical scientist," and a caring shaman/therapist the team helps others and solves previously incurable diseases and conditions. And it all takes place in the aftermath of an expedition to solve the mystery of a cursed valley which, while successful, turned them all into members of the opposite sex, to which they adjust with varying degrees of success.

Some of their major patients so far range from a sentient tree to a girl that is mysteriously invisible to a man suffering from a horrible sentient cancer. Various minor cases crop up that are even more bizarre, such as a man who cannot pronounce any word with the letter "E" in it or a woman trapped in slow motion from birth. Others are odd by our world's standards but considered commonplace by theirs, such as performing voluntary transformation services (like enlarging a pixie to human size so she can live among humans, or rejuvenating the elderly). They've also battled evil more directly as adventurers, including fighting a small army of assassins and dealing with a mysterious serial killer.

Unfortunately the author was only just learning to draw when starting out; the first chapter's art is very rough and though it is miles from where it started, it's not yet at "professional" level. (The page image is fan art). How much you enjoy the comic may depend on how tolerant you are of amateur art.

The comic is sometimes compared to The Wotch, due to its inexperienced artwork and recurring transformation theme, but its story, tone, and premise are decidedly different.

The comic is Not Safe for Work due to Nipple and Dimed from chapter 16 onwards.

The comic has been published on three different sites: on the author's DeviantArt page — ~Oddsquad

— named after his previous comic; up through the beginning of Chapter 18 on Drunk Duck (now The Duck), here

, with occasional strips and progress-strips going back to DeviantArt when Drunk Duck was down; and the current site

, hosted by DHS Comix, started in September 2013 during an extended Drunk Duck outage.

The author has also launched a Patreon campaign

This Web Comic contains examples of the following tropes: