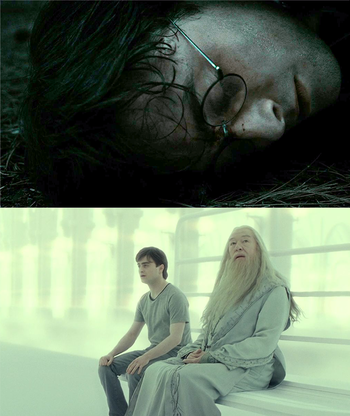 "I think you could board a train if you were so inclined."
"And where would it take me?"
"On."
Advertisement:

The trouble with writing about the afterlife is that it's the undiscovered country from whose bourn no traveller returns; how do you write about something that nobody who is alive has ever seen, nobody who is dead can explain, and that might not be comprehensible to a living person?

One way of handling it is to divide the afterlife into sections: this here's the bit you're in immediately after you die, which is somewhat familiar. Over there is the afterlife proper, which we're not going to talk about. The story only concerns itself with the nearest part of the afterlife; when characters move on to the afterlife proper (often by Going Into The Light), they exit the story. Only Mostly Dead is relatively easy to fix if the soul is still in the chamber. Once it moves on, it's most likely impossible.

Sometimes the near, familiar part of the afterlife overlaps the living world, so that the deceased can walk around seeing how life goes on without them. (See Near-Death Clairvoyance.) Whether they can interact with the living depends on the story.

If the afterlife includes something like Christianity's (and Egyptian Mythology's) idea of judging souls to sort them between heaven and hell, then this stage may be the stage where the judgment is made, and the soul waits for the verdict and is possibly able to say or do something to influence how the verdict turns out. This stage may be called Purgatory, although it doesn't necessarily have to involve the purging of sins.

Sub-Trope of Purgatory and Limbo. Compare Psychopomp where the soul is merely ushered off to its new (after)life from its mundane location. See also Offscreen Afterlife, in which the afterlife is not depicted at all, and The Afterafterlife, an official afterlife that comes after another afterlife.

The After in "Welcome to the After (music video)" is a White Void Room with nothing but a couch and television where dead souls go to be judged.

The After in "Welcome to the After (music video)" is a White Void Room with nothing but a couch and television where dead souls go to be judged.