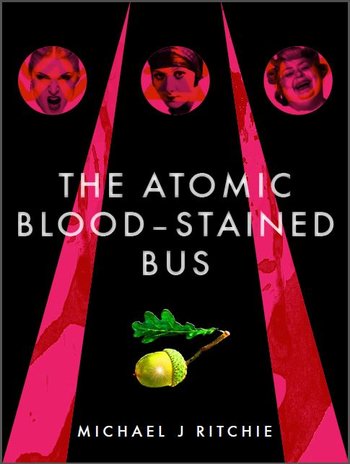 The bus is coming...
Advertisement:

The Atomic Blood-Stained Bus is the debut novel of Michael J Ritchie, published in 2014.

Garfield Sutton is a 700-year-old druid who drives a bus around mainland Britain and eats anyone who gets on board. He is accompanied by the former God of Spring, Algernon, who has been kicked out of the heavens and, with immortality to contend with, now travels with Garfield cleaning up after him.

Gwen Mckenna is a twice-divorced tabloid journalist from London who has two main obsessions: magic and missing persons. When she goes on the trail of another vanished citizen, she begins to realise that a bizarre number of missing people were last seen "getting on a bus". And her interest is only piqued further when a witch tells her to stop her search.

And if that wasn't enough, there's also a headless horseman, an eons-old bartender and some lost souls to deal with.

The bus is coming...