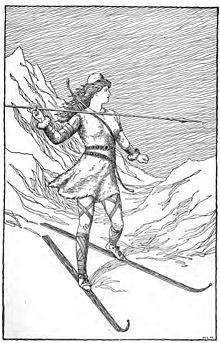 Meet Skadi, goddess of skiing.note image: Skadi Hunting in the Mountains by "H. L. M"
"They invaded Greece and conquered them and and stole all their gods and renamed them with Roman names. Cause the Roman gods before that were kind of crap, you know, Jeff, the god of biscuits. And Simon, the god of hairdos. And uh, you know, they had the god of war, the god of thunder, the god of running around and jumping and stuff."
— Eddie Izzard, Dress to Kill
Advertisement: