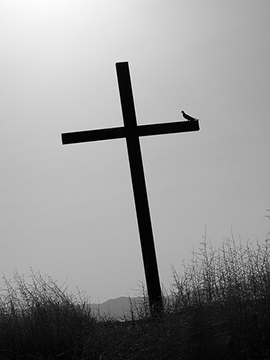 Your soul better belong to Jesus... 'cause your ass belongs to me.
"God doesn't love you. Not like I do..."
— Val, Outlast II
Advertisement:

A sub-genre of Horror that relies on presenting the motifs of a real-life religion as fact within the story's universe. In Western examples of this subgenre, that religion is normally Christianity.

Satan is the Big Bad in a typical Religious Horror story, although he's rarely shown. He is mediated through a human vessel, such as a Creepy Child or a degenerate rock musician. Sometimes Satan is not much or even at all present in the story, but is instead a distant force of evil responsible for the actual Big Bad in the story. The protagonists are usually innocent people trying to live ordinary lives, not sensing anything wrong until their daughter or son starts speaking in someone else's voice, using foul languages she or he never studied, spewing Finnish pea soup, and/or chanting Satanic praises. Members of the clergy (most likely the Catholic variety; in this case it is justified by the fact that the Catholic church, of all the few that employ exorcism, is the most noted, although it does so very rarely) intervene eventually, with varying degrees of success. If there are human villains, they're evil cultists who facilitate the Devil's activity on Earth (or, rarely, the Puritans of Salem, Massachusetts, if the author is less favorable toward organized religion in general). A variation is a woman giving birth to Satan's child. This type of horror is often written just to cash in on the popularity of The Exorcist and Rosemary's Baby.

Another perspective, more common in recent years, is an inverted one, that of how God Is Evil; the fire and brimstone Disproportionate Retribution aspects of the Old Testament god are built upon to depict Him as the Big Bad. God Is Evil stories have an overlap with the Cosmic Horror Story, as God is often described as alien, omnipotent, invincible and whose nature is impossible to ever comprehend, in a very Lovecraftian style. Our Angels Are Different is usually in effect, with the angels being portrayed as alien and far removed from humanity (it helps that depictions of angels in the Torah and the Old Testament get quite freaky).

Occasionally, the story revolves around a Religion of Evil that has nothing to do with Satan, which may or may not replace him with a Satanic Archetype or an Expy in the form of a God of Evil. Even if these are more imaginative in their concepts than the Christianity-based works, they are not necessarily more bizarre.

Very rarely, you get a film that actually bothered to do the research, and includes horror either from the point of view of some religion other than Christianity, or more commonly, have another religion as an antagonist (or even more rarely, do both). In the former cases, even if the movie itself is bad, the concept is very interesting. In the latter case, it ends up a variant of type 2, with the added problem of sounding like something from Chick Tracts. (Alternatively, the "enemy" religion can be shown to not be bad in and of itself, with the problems primarily being caused by a group of whackjobs who take it WAY too seriously and/or feel threatened by the existence of the protagonists' religion and act accordingly, although this again veers into Type 2 territory.)

See also Cosmic Horror Story, which, as said previously, tends to show up in type 1. If a Cosmic Horror Story's Eldritch Abomination is worshipped as a god, then the story can fit into the second type. Folk Horror is a subtrope focused on "folk" or pagan "old ways".

"And no wonder! For Satan disguises himself as an angel of light." - 2 Corinthians 11:14

"And no wonder! For Satan disguises himself as an angel of light." - 2 Corinthians 11:14