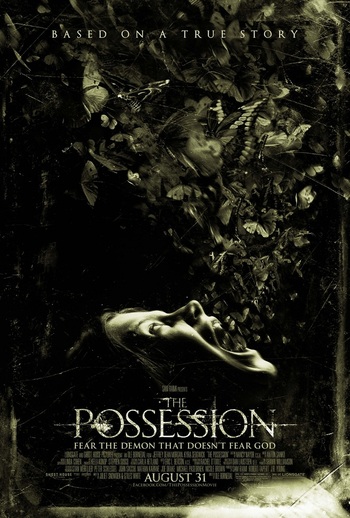 Those moths are gonna leave a full stomach.
Advertisement:

The Possession is a 2012 supernatural horror film directed by Ole Bornedal and co-produced by Sam Raimi. It was released in the United States on August 31, 2012, with the film premiering at the Film4 FrightFest.

Clyde (Jeffrey Dean Morgan), a recent divorcee, takes his daughters Hannah (Madison Davenport) and Em (Natasha Calis) to a yard sale, where Em picks a beautiful wooden box carved with Hebrew letters and no clear lock or latch to open it with. A box that whispers. And has a tendency to telekinetically thrash and physically distress those it dislikes. Throughout the course of a month Em is ensnared by the Dybbuk trapped inside the box as it slowly possesses her. Can Clyde and ex-wife Stephanie (Kyra Sedgwick) figure out what is happening to their daughter in time, or will she be lost forever?

The film is interesting for drawing on Hebrew folklore to create the spiritual nemesis facing the family, making it different from standard ghost or demonic possession horror films.

Not to be confused with the 1981 European film Possession.