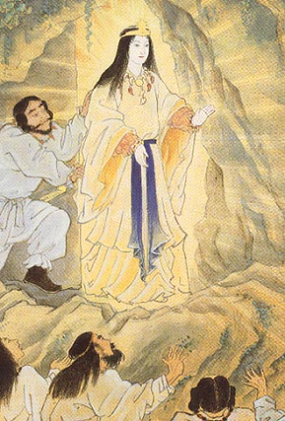 Amaterasu, origin of all that is good and mother to us all.note Wolf form optional.
"Our vision is one of peace. Our path, of mercy. We see—as you must also—how those who do not follow Us have been deceived or corrupted by the forces of wickedness. Thus, in their weakness, have they been lured into an existence of treachery and debasement. We weep for them, knowing there is no greater sin against oneself than the failure to believe in one's own worth."
— The Book of Persephone, Sacrifice
Advertisement:

In many works, there is a God of Evil. An ultimate embodiment of evil that seeks to either spread unhappiness or kill as much as he/she wants.

This is the inverse of that, a deity that seeks to defeat evil and/or seeks to spread goodness. In most works with a God of Good, he/she will often (but not always) be the Big Good, guiding The Hero but not getting directly involved in his/her quest to defeat the Big Bad. In some cases, the god of good's role can be spreading good will or actively repairing that which has been tainted by evil or simply maintaining the world from plain old decay. It might seek to convert all to the setting's standard of goodness, warping hate into love, despair into hope, obsession into indifference where appropriate.

There is a tendency for Gods of Good to be female rather than male. Also, Beauty Equals Goodness (and by proxy Hot God) tends to come into play with this trope. There is common overlap with Gold and White Are Divine and Light Is Good. These deities are also commonly a God of Light.

Not in any way to be confused with God Is Good, which is when there is a single god who is good (though in most monotheistic faiths, God is given this title, and many others like it, so He actually still counts).

To avoid Flame Bait and Edit Wars, note that this trope isn't about gods who simply are good, it's about gods of goodness. Gods who are nice but mostly defined by other qualities do not qualify. If the god can, by the setting's definition, do evil without contradicting their very being, they don't count.