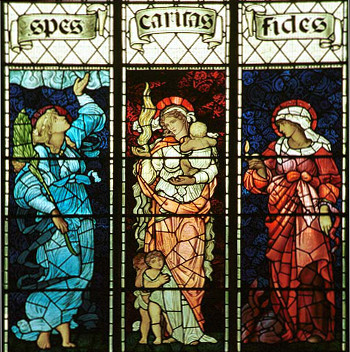 In some works of fiction, virtue is a central theme. Virtues usually constitute parts in a system, where the individual virtues are regarded as aspects of goodness, and no virtue alone is enough to form a good character. While they complement each other, they may also come into conflict with each other, leading to moral conundrums.

In fictional works dealing with virtue, the author often chooses to assign each virtue in the system to a different character, allowing said characters to allegorically represent their respective virtues through the natural leanings of their personalities. For example, a naturally empathic and compassionate character may be (explicitly or implicitly) assigned the virtue of Compassion to represent, while another may be assigned the virtue of Loyalty on account of his or her personalities' natural affinity for this virtue.

Sometimes this trope is applied to entities other than characters in works of fiction, such as organizations or even inanimate objects. In the latter case the representation has nothing to do with the personality of the assignee, for obvious reasons, but is rather more arbitrarily symbolic. For this reason this is not a strict subtrope of Allegorical Character.

In the specific case of literal personification of a moral ideal in the form of a character, we are speaking about an Anthropomorphic Personification.

The inversion of this trope is Embodiment of Vice. One notable difference between the two tropes is that in the case of characters, the people involved usually are aware of their virtues, and strive to actively cultivate them. Characters that personify vices are usually either unaware of them or somehow unable to overcome them. For example, characters that actively strive to be honorable and courageous are extremely commonplace in fiction, but how many characters have you encountered that strive to be as greedy as possible, for the sake of greed in and of itself? (well, it does happen occasionally). Vice is nearly always motivated by something other than the desire to be vicious, unlike virtue. In the (at least in real life) rare cases where this is not the case, we are dealing with a villain who does evil simply For the Evulz. Compare the Seven Heavenly Virtues.