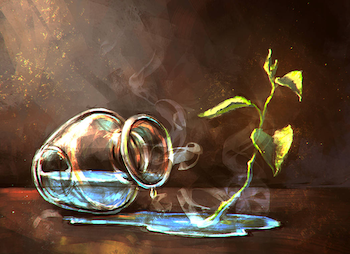 Common in older folklore, the Elixir of Life is a stock element of Magic which grants renewed life to whoever drinks it. This may range from Panacea to a true Immortality Inducer that doubles as a Fountain of Youth. Indeed, in cases where an example of said Fountain is not inherently magical, its properties come from the fact that it is Elixir of Life springing from it as opposed to water.
Advertisement:

Unlike the Fountain of Youth's waters (except for overlaps between the two tropes), the Elixir of Life must usually be drunk to take effect, rather than bathed in.

Said to be related to the Philosopher's Stone in alchemical lore, though this was not always its origins in myths and legends. No Immortal Inertia and/or Rapid Aging are likely to occur if a repeated user stops taking elixir. Subtrope of Magic Potion. Compare Healing Potion (which sometimes overlap).