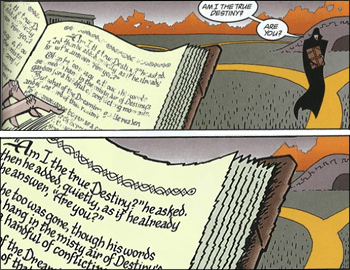 What if you start reading a book and suddenly realize that the book is about you! This has got to be some joke, right? But then how could whoever wrote this have known that you would read the section which says you are in the cafeteria reading the book under a table, at the exact time you were doing just that? And now it's talking about what you're contemplating at this very moment, and this blows your mind.

Don't worry, variations of this happen a lot and it seems like Reality Writing Books are everywhere. There are three main types:

Your Fate Is Already Decided

The book is already completely written and has predicted your every move. This may double as a Tome of Fate, depending on whether the book itself is magic (which would qualify under this trope), or someone else merely wrote such things in a more or less standard book (which would not qualify). Sometimes events written in the book turn out to be wrong, or able to be changed by the character's reaction to the information the book provides.

The book writes itself as you read it, observing rather than predicting your movements. It may contain information merely about what happens around the book itself or things which are pertinent to the plot of the story. Often these books also have some form of omniscience, and have things written in them that the protagonist could never have known about ("Little does Alice know, that Bob is sneaking up behind her at this very moment!"). The words might literally appear on the page before your eyes, or as you turn the last page written on there might mysteriously be a next one.

The book must be written in, and the things you write about start happening. There may be certain rules attached to this version, or not everything you write will happen, it might be random chance which elements you write down come to pass.

Keep in mind this isn't always a book. Online material or videos and such are growing more popular to use as such items.

See I Should Write a Book About This for cases where the story the character writes/tells in the book is (implied to be) the very book you are reading. Compare Tomes of Prophecy and Fate, Brown Note, Rewriting Reality, Reality Warper, Author Powers, and The Fourth Wall Will Not Protect You.