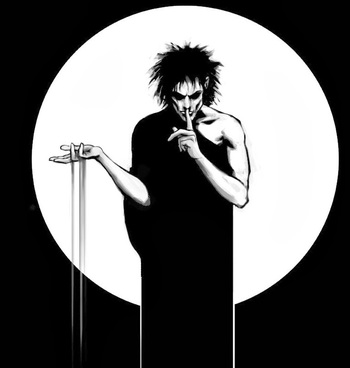 Sweet dreams are made of this...
Advertisement:

The Sandman (or Mr. Sandman) is a mythical character in Western and Northern European folklore who puts people to sleep and brings good dreams by sprinkling magical sand onto the eyes of people while they sleep at night. Usually depicted as good, in some stories he is also depicted as bad, as well as neutral. The Sandman as an entity of dreams receives many names (like Morpheus in Classical Mythology), but this character has specific traits that distinguish him from other such entities:

This trope is about Sandman and all his representations in the different media. Compare Sentient Sands (although some examples overlap).

Not to be confused with the Spider-Man enemy (literally a sandman), the comic book, the video game, the short story, or the animated film based on the short story.