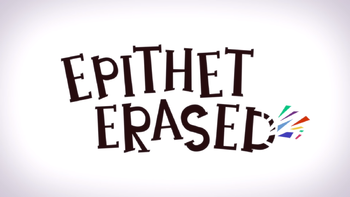 "WAKE UP! You've got a lot to do today..."
"Epithets! Rare powers! Some people got 'em! Some people don't!"
— Mera Salamin
Advertisement:

Epithet Erased is an ensemble comedy/adventure cartoon series created in partnership between VRV and Brendan Blaber, creator of the So This Is Basically... and Welcome to... series under the username JelloApocalypse. A loose adaptation of Brendan's Roll20 Tabletop RPG campaign Anime Campaign, it's produced in a Limited Animation style similar to Brendan's aforementioned webseries — excluding a few fully-animated sequences such as the opening, which are produced by Powerhouse Animation Studios — with numerous RPG elements stylistically sprinkled in.

In the world of Epithet Erased, one in every five people has a unique ability called an epithet, granted to them at birth by a random word inscribed onto their soul. While some people get words like "Fire", most of the time they wind up with useless words like "Coupon" or "Soup" (well, seemingly useless, anyway). Rumor has it that there exists a magical artifact somewhere in Sweet Jazz City known as the Arsene Amulet, which has the ability to steal epithets, making it the perfect target for thieves, miscreants, and generally not-so-nice folks who'd kill to get new powers for themselves—or take them away from someone else. The question is, who will be the one claim the amulet at the end of the day, and which unlucky sap will end up with their epithet erased?

The series is stated to be broken up into multiple story arcs, each spotlighting different members of its gradually increasing cast while tying into a larger plot. The first season premiered on VRV

on November 8, 2019, with new episodes airing weekly. The episodes can also be watched on Brendan's YouTube channel

, where episodes were uploaded two weeks after their premiere on VRV.

In July 2020, it was confirmed that, due to the steep cost of making an animated show and VRV's lack of interest in funding future seasons, Epithet Erased would continue as a series of light novels and audio books

. The first of these books is Prison of Plastic, scheduled to release in July 2022; tropes for the book go on its respective page. Adaptations of the first two story arcs are also planned to see novel adaptations.

While he does have a few badass moments, Giovanni is mostly shown to be a childish, butt of many jokes, whose epithet is revealed to be...Soup.

While he does have a few badass moments, Giovanni is mostly shown to be a childish, butt of many jokes, whose epithet is revealed to be...Soup.