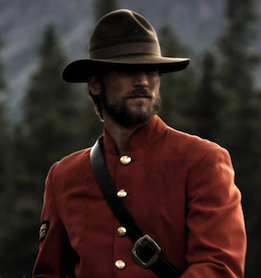 A Fistful of Loonies*  — tm The Toronto Star on The Mountie, though the Loonie didn't arrive until 1987, long after the Old West
Advertisement:

The Canadian Western, or "Northern" as it is properly called, is The Western IN CANADA!, with a few characteristic differences. There tends to be more snow in Canada and Alaska, the other setting for the Northern, than in the western United States. As such, instead of the deserts and rock formations of the American Southwest, the iconic imagery associated with the Canadian Western is that of snow-covered boreal forests and mountain peaks.

Furthermore, there's the Royal Canadian Mounted Police, always dressed in the famous Red Serge uniform, who always get their man (or so they're supposed to do). If it doesn't have Mounties, it's not a Canadian Western. In a way, the Mountie represents a transition phase in the idea of the frontier lawman: he's often isolated out in the field, but he is part of a larger formal organization with the central headquarters located all the way back in Canada's urban national capital in Ottawa, Ontario, and will occasionally make the trip there on administrative business and vice versa. In reality, while they are a common staple, not every Northern has a Mountie as the central character, with examples being White Fang and the 2016 film Searchers.

There will also nearly always be a Remittance Man.

Despite popular belief, the Northern is not a Dead Horse Trope. It is still going strong with series such as When Calls the Heart and films such as The Mountie keeping the genre alive.