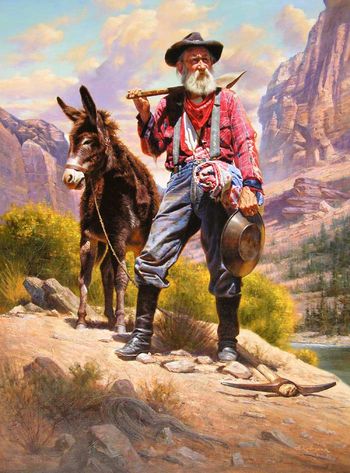 "The Old Prospector" by Alfredo Rodríguez

A character who searches for mineral resources, traditionally gold.

The profession of prospector is actually quite an old one, for as soon as humans understood that there were valuable minerals to be had, some of them spent their lives looking for new supplies. But it came into its own in The Wild West, with its large tracts of unexplored land.

In particular, the California Gold Rush brought many people west to seek their fortune. (See Forty-Niner for this specific incident.) After the initial gold rush was over, some miners stubbornly refused to quit the profession and spread over the Western territories. At first, gold and silver were the desired commodities, but later oil, radium and uranium became the hot items to search for. Some would spend any money so manically after a rich haul that it raises suspicion that they wanted to get back to the profession regardless. A few decades later, Canada would have its own Gold Rush in the Yukon Territory (specifically, the Klondike region), which brought settlers and adventurers up into the northwest.

The stereotypical image of the Prospector is an older man dressed in faded work garb, with a grey beard, missing teeth, a pickaxe and a trusty mule or burro. (See our page picture.) He'll be subject to intense bouts of Gold Fever, wild celebration when he does find a rich deposit, and suspicion of anyone who gets too close to his claim. You will rarely see a young, well-groomed prospector in fiction.

Typical plotlines include: "Claim jumpers" trying to get the prospector out of the way by swindle or force to steal his claim; a dying prospector giving the protagonist a map to his lost mine; a "worthless" claim turning out to be extremely valuable because there's a different mineral than what was expected.

See also Mountain Man for a similar archetype who makes a living with a different commodity, and Asteroid Miners for several elements of this trope Recycled IN SPACE!. Has nothing to do with with Gold Digger, which is more about hooking up with someone for money.