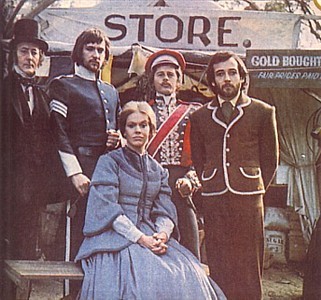 Rush was an Australian Historical Fiction drama series on The ABC, which premiered in August 1974. The first season was set during the Victorian Gold Rush of the 1850s, located in a fictious goldfield called Crocker's Gully, in the Dandenong Ranges outside Melbourne.

The stars of the first season were Brendon Lunney as Edmund Fitzalan, a young and inexperienced Gold Commissioner, and John Waters as Sergeant Robert McKellar of the Victorian Police. Olivia Hamnett played Sarah Lucas, a young woman from England who had been recently widowed during her voyage to Australia, who eventually becomes McKellar's love interest. Rounding out the regular cast were Peter Flett as Dr. David Woods, Alwyn Kurts as wealthy squatter and Justice of the Peace Lansdowne, and Max Meldrum as miner George Williams.

The show was renewed for a second season of 13 episodes, which picks up in the early 1860s with McKellar, now widowed after the death of Sarah, arriving in Turon Springs, New South Wales, and being enticed back into the police force by Superintendant James Kendall, played by Vincent Ball. The supporting cast included French actor Alain Doutey as Constable Emile Bizard, Paul Mason as Captain Richard Farrar of the Great Eastern Mining Company, Jane Harders as his wife Jessie Farrar (and McKellar's new love interest) and Delore Whiteman as Rosie Morgan, owner of the local pub/brothel, and Max Meldrum as Henry Purchase, the local bank manager.

The first season was famously parodied on The Late Show (1992), in a Gag Dub sketch called The Olden Days.