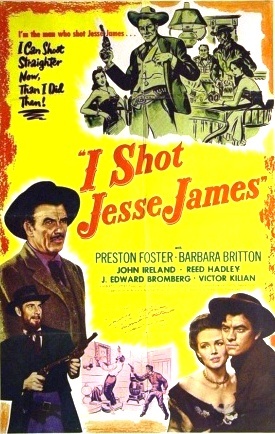 Just because you kill the bad guy doesn't make you the good guy.
Advertisement:

I Shot Jesse James is a 1949 Western, directed by Samuel Fuller in his directorial debut and the launching pad for his successful directing career. The story concerns that of Robert Ford, the infamous killer of famous outlaw Jesse James, and the personal aftereffects that the killing had on Ford. The film spans over ten years of time, beginning at Ford’s tenure in Jesse’s gang and ending at Ford’s residence in the city of Creede, Colorado. Ford’s main focus is to settle down with his best girl Cynthy, but he soon finds that killing the West’s most infamous outlaw brings him a nasty reputation that hinders him from moving on with his life.

The film is noticeably low key, focusing more on Ford’s own tortured emotions than the usual action scenes that filled Westerns of this era (though there’s still plenty of action in it). It also deals with complex themes like guilt, self-loathing, and the effects that taking another life can have on a person. Unlike many other Jesse James stories and films of the time, the film takes a sympathetic view of Robert Ford and portrays him as a victim of Western society’s double standards and how they romanticized outlaws.

It should also be noted, however, that the film has a very heavy case of Artistic License – History. Not only is there an added Love Interest for Robert Ford, but there are plenty of personal details about him and other real life people changed for the film’s benefit. This doesn’t make it a bad film, but it’s best to keep this in mind and not look at it as a definitive Biopic of Robert Ford.