Blasting It Out of Their Hands 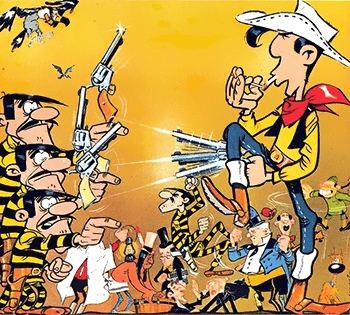 Pretty quick draw, am I right?
"Well, don't just stand there looking stupid, grasping your hands in pain. How about a round of applause for The Waco Kid?"
— Bart, Blazing Saddles
Advertisement:

A character shoots a weapon out of another's hand, or shoots their hand in order to force them to drop the weapon. The one on the receiving end on this trope, however, almost never gets hurt past a brief scream.note Although in particularly more violent works the poor schmuck gets a case of Fingore instead. Indeed, this technique is often used by heroic gunslingers (who may have an aversion to just shooting the enemy) to subdue their enemies without killing them.

Sometimes, however, they were aiming for something else.

In the case of the gun being shot (not the target's hand), if the gun is somehow still usable despite having been hit by a slug of lead and copper traveling in excess of 800 feet per second, then it's a case of Magic Bullets.

Truth in Television, although this isn't a common practice given how it's much easier to simply aim for centre mass (i.e. the target's torso). Miss the shooter's hand or their gun, and they've still got a weapon they can fire at you. Police and military snipers have been known to shoot at the firearms of their targets on occasion.

Not to be confused with an Arm Cannon or Blasting Time. Often an example of Improbable Aiming Skills. For the version involving melee weapons, see Melee Disarming.

Alternative Title(s): Shooting It Out Of Their Hands