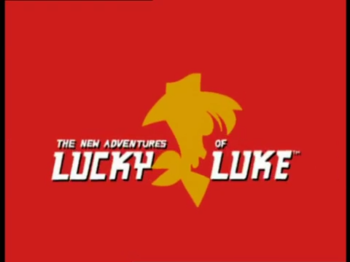 The New Adventures of Lucky Luke is a 2001 French-Canadian cartoon based on the eponymous comics, made by the Xilam studio (they also did Space Goofs and Ratz). It features all new stories based on the character. It is also notable for having the background and characters change colors in certain situation, something that wasn't done in the previous cartoon, but which actually originates from the original comics.

It ran for 52 episodes from 2001 to 2003 and features a wide cast of characters, one-shots and recurring ones. A movie centered around Lucky Luke made by the same studio, Go West!, was released in 2007. Xilam also made a series about Rantanplan titled Rintindumb and one about the Dalton Brothers titled The Daltons.

The New Adventures of Lucky Luke provides examples of: