Recap / Doctor Who 30th AS "Dimensions In Time" 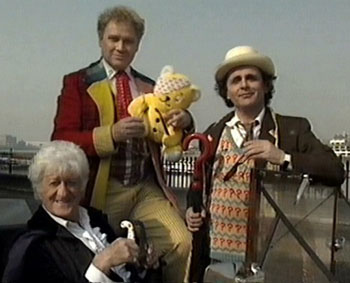 It's a nostalgic tour de farce!note And with the Sixth Doctor's coat of clashing colours again!!!
"I, I mean we, are difficult to get rid of!"
— The Seventh Doctor, having a sudden bout of real-world clairvoyance
Advertisement:

As 1993 approached— and with it, the 30th anniversary of Doctor Who— the small but relentlessly devoted fanbase slowly worked themselves into a frenzy. The BBC started re-airing certain episodes of the old series (no new ones, though, unless one includes the radio story The Paradise of Death, as it had been can— er, "put on extended hiatus" four years earlier). Books came out to discuss Doctor Who and a fantastic Darker and Edgier movie-length special was announced that would involve all the still-living Doctors and a plot by a villain (that would've been played by Rik Mayall!) to throw the universe out of whack — resulting in a "Dark Dimension" where the Fourth Doctor somehow never regenerated into the Fifth at the end of "Logopolis".

This is not that story. This is what happened instead.

Advertisement:
This special, aired in two less-than-10-minute parts as part of Children in Need, begins with the Rani bragging about doing awesome things with time and having already captured the first two Doctors; they've been infected with Floating Head Syndrome and said crappy head models are in 3D, modelled with 1993's finest-quality yet also most terrifying computer graphics (anyone hoping for Peter Gabriel to show up and start singing "Steam" will be sadly disappointed) and wax sculpting. After an inexplicably sped-up version of the intro set to a version of the title theme fit for a rave, the Fourth Doctor, now inexplicably short-haired, pudgy, and old (Tom Baker was 59, but that said he already looked 80), decides to send out an SOS to his other selves while trapped in a Windows 95 screensaver, begging for them to listen to him "for once" and warning about the Rani by pointing out that she... hates children. Yeah, it's going to be that kind of story. The Seventh Doctor and Ace, apparently fresh from the Cheetah Planet, land in the middle of the EastEnders soap opera— literally— and mill about.

Thanks to the Rani's machinations, the Doctor starts shuffling through his Third, Fifth, and Sixth incarnations, with Ace continually being replaced by a random companion: Sarah Jane, Susan Foreman, Peri and Nyssa, Mel, Liz, Victoria, Romana II, and so on. The Rani gloats to the Doctors as she summons up old enemies. Time in the EastEnders set shuffles around between 1993, 1973 and 2013 (modern viewers may now proceed to laugh at the lack of smartphones and Twitter). Things pick up the pace, the audience gets really confused, and then the Rani captures Leela while she's in the form of Romana II. This somehow screws up the Rani's machine by having two Gallifreyan Time Brains in her computer, with the Seventh Doctor commenting that it'll explode. Fair enough. UNIT shows up as well in the middle of all that, including the Brigadier in a helicopter, finally meeting Six. Sort of. In the end, the Seventh Doctor and Ace return to their TARDIS and ride off.

And the Rani is still not very good at her job.

This was supposed to be a little longer, but the second part was actually shown as part of variety show Noel's House Party, and presenter Noel Edmonds insisted it be edited down for timing reasons, which served only to make the story even more incomprehensible.

This was Jon Pertwee's last appearance as the Doctor in an official setting before his death three years later, RIP. His final performance as the Doctor in a filmed Doctor Who story, sets, location shoots and all, was technically in 1995, for the fan production Devious. As a point of trivia, this is also Tom Baker's first reprisal of his role (barring his in-character narration of the unearthed "Shada" in the 1992 VHS reconstruction) since departing the series in '81, and he wouldn't be back again until Big Finish Doctor Who. Nicholas Courtney finally got to be featured alongside Sixth Doctor Colin Baker — meaning that he's the only actor to be featured alongside the first eight Doctors! (He also played Bret Vyon opposite William Hartnell and played the Brigadier opposite Paul McGann for Big Finish Doctor Who a few years after this. Alas, health problems meant a planned appearance opposite David Tennant in The Sarah Jane Adventures never happened.)

Sadly, Kate O'Mara also made her last on-screen performance as the Rani in this story in her lifetime, continuing the role in audio stories until her eventual death, never reprising the role in the revival-era series and having her character willed to a new actor and regenerating. Oddly enough, in this last outing, she has picked up a passenger, Cyrian (who even got his own origin story in that years' Doctor Who Annual. His name is a pun, by the way - he was supposed to be played by Sir Ian McKellen. And you thought this episode couldn't get any weirder!) That explains why her TARDIS appears to be reduced to a villainous knock-off of the Doctor's rather than the unique design it used to have (besides budgetary constraints/desktop changes).

This special has been considered non-canon by official sources because of its comparatively nonsensical premise to the rest of the series proper, not to mention the depiction of EastEnders in 2013 subsequently being contradicted by what happened in the real 2013 (a sigh of relief for some fans who take continuity seriously). The Doctor Who New Adventures novel First Frontier drops a mention of this special as a nightmare the Seventh Doctor once had, which is probably the best definition of this episode.

And finally, it's the one and only onscreen writing credit for the series' longtime producer John Nathan-Turner,note although he also served as de facto script editor for "Terror of the Vervoids" and the second episode of "The Ultimate Foe", uncredited, after Eric Saward walked out on the production and aside from co-ordinating some video releases and a talking-head appearance on early DVDs, his last work for the series.