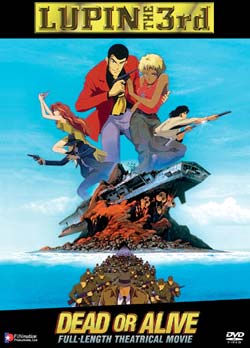 The fifth theatrical animated Lupin III movie, released the 20th of April, 1996. It has the proud distinction of having the original creator, Monkey Punch, as Supervising Director. Funimation licensed this film for US release in 2002, along with Farewell to Nostradamus and eight annual TV specials.

Lupin and gang are attempting to recover the treasure on "Drifting Island"*  (subtitles say "Drift Isle"), an island inside another island, and part of the fictional country of Zufu. Zufu has recently undergone a bit of political upheaval: The king and his son, Prince Pannish, have been killed in a military coup d'etat. General Headhunter has been in charge for two years, now. And he wants the treasure that the king left on Drifting Island, too. He's willing to put out a bounty on the foreign thief to keep him away, one million dollars to the bounty hunter who brings in Lupin the Third, Dead or Alive!

While Fujiko works her way into General Headhunter's service, Inspector Zenigata arrives by plane. Is Pannish really alive? What is the treasure guarded by the Nanomachines? Will the bounty hunters capture Lupin and his gang? Is anyone who they say they are?

This theatrical movie features examples of:

Goemon cuts boats in half without any of the guards at the river outpost realizing it.

Goemon cuts boats in half without any of the guards at the river outpost realizing it.