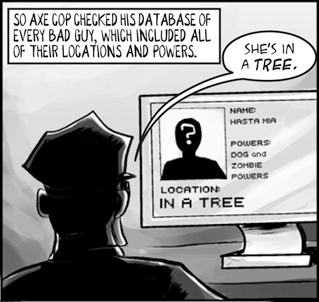 He also has a file of maps to bad guy labs.
Horatio: I need a report on all the walls ever made ever.
Tech Guy: I'm on it... According to this, this particular model of wall is of an excellent quality. It doesn't creak. Unless... there's a body behind it.
— Slackerz making fun of

No matter what sort of clue the Crime Scene lab has found (blood, wire, rope, oil, perfume, etc), somebody has manufactured a database designed to search through them all. Not only that, our heroes at the crime lab have purchased a copy of this software,note not necessarily needed, if the FBI/CIA/NSA already has a copy of the database — these organizations can be hacked within seconds by the average crime lab nerd the interface devices to input the data in question and have acquired the expertise to use this software (which has so far never been used in another one of their cases) with 100% accuracy on the first attempt.

It should be noted that some of these "Omniscient Databases" actually exist, and are in use by various agencies, though they aren't quite as stunningly accurate or omniscient as the Police Procedural suggests. In real life, "Data Mining" is a time-consuming task that has to be practiced. Does each agency host a different server? Which ones pull from each other? Are all servers identical? Are there delays in updating the databases? These are all questions the searcher needs to be aware of, and there is no single database that stores 100% of the information.

A key aspect of this trope is that there must be a pre-existing compendium of all possible samples of whatever is being identified. In Real Life, forensics can indeed match samples of, say, paint or glass not only down to manufacturer but even to a specific batch, but this requires two samples: one sample from evidence, and another sample to compare against. This also means that in real forensics, the implications of this evidence are different; while crime dramas typically use the Omniscient Database to find a new lead from trace evidence, real forensics usually confirms identity after the police have already gotten a lead (i.e. the police already suspect the glass came from the suspect's house or workplace and can prove it by comparing them, as opposed to identifying where the suspect lives with no prior knowledge just from the glass sample).

Even in cases where there are well established databases, like criminal records, there are computer scientists who have dedicated entire careers just figuring out how to combine databases from various departments and institutions. When computers first started to be used for keeping criminal records, standardization was rarely considered, as they were for the use of that department alone, unless they were in a particularly forward-thinking county or large city where they shared records among local departments. It rapidly became apparent that this was a problem when departments began sharing records over the internet. One database may describe a criminal's eyes as "Light blue", another as "BL" and a third as "Lb". The same departments would describe another criminal's eyes as "Dark Brown", "BrD", and "B". This is after you manage to figure out which column denotes eye color, mind you. Even after the problem was discovered, change was slow because in some cases, such as New York City and London, the same basic forms had been used for over 100 years, and had simply been transferred from index card to hard drive.

Forensics labs also have an out for many of these Omniscient Databases, since it's generally believable that they would have a database of common murder weapons or components of weapons.

Narratively, there are two distinct (but related) uses of this trope:

Omniscient Databases almost always have a Viewer-Friendly Interface. If it's on paper or supernatural, it's a Great Big Book of Everything. See Akashic Records for a related but older trope. These are a special Applied Phlebotinum used primarily in Police Procedural dramas, sometimes ones with a supernatural element. Compare Expositron 9000.

Not to be confused with the Magical Database, which holds information on supernatural elements as well.