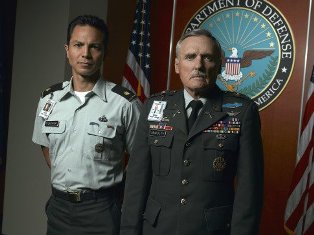 Executive produced by Jerry Bruckheimer, E-Ring was a military drama set in the E-Ring, or the outer ring, of the Pentagon. Major James "JT" Tisnewski (Benjamin Bratt), a veteran Special Forces operator, is plucked from the field and given a desk job as part of the Special Operations Division of the E-Ring, responsible for the planning and deployment of covert US special operations worldwide. With his superior Colonel Eli McNulty (Dennis Hopper) he struggles to navigate the bureaucracy of the Pentagon in order to gain approval from the Joint Chiefs of Staff for numerous controversial missions around the globe, from rescuing American agents in China to battling insurgencies in Southeast Asia (and at home).

The show struggled from the onset, due to being pitted up against hit shows such as American Idol, Criminal Minds and Lost. It was eventually canceled after 22 episodes were filmed.