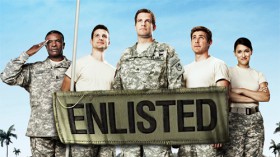 The Army is filled with troops on heroic missions, and then there's us. We take care of things at home. We are the Rear Detachment. Yes, we're soldiers.
Advertisement:

Meet Staff Sergeant Pete Hill. Badass insurgent-fighting machine of the United States Army. While doing his usual One-Man Army routine in Afghanistan, Pete gets just a little annoyed that his unit is denied backup in a firefight...because the computer is down.

Annoyed to the point that he hauls off and punches the Colonel who denied it. Well, the consequences soon fall. Pete is being shipped to Rear D, the glorified grass cutters and tank washers of the Army. But he's not getting shipped to just any Rear Detachment.

He's headed to Fort McGee in sunny Florida. The same base his two younger brothers, sarcastic and uninterested Corporal Derrick, and overeager and incompetent Private Randy are stationed. And if that wasn't enough, Super-Soldier Pete is now assigned to the Motor Pool.

Stuck in the sticks, Pete has to do his level best to not lose his mind and whip this Ragtag Bunch of Misfits into shape.

Despite a strong fan following, it was axed after its first season.