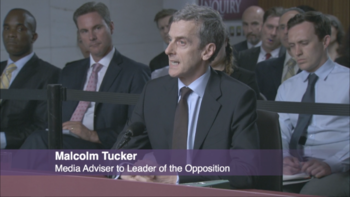 Calling your party "the opposition" seems like it'd make it difficult to get votes.
"He's of a non-specific party. Like almost every Prime Minister for the past 20 years."
— Stephen Fry, QI, on his role as the Prime Minister in 24
Advertisement:

When a fictional work features a politician, or two characters running for an elected position, often the parties they represent are not identified.

If, for example, a movie features a President Evil, identifying their party might make a political statement that the writer does not intend to make. A President who is a heroic Action Politician? Same problem. It may simply be a lack of commitment on the writer's part — the character might espouse views from both sides. In any case, it avoids unnecessarily offending a large portion of the audience.

It sometimes stretches credibility, but sometimes not. Real-life politicians in the US often say "Smith for Congress" without mentioning party affiliation, but in Britain campaigns often give the party name, e.g. "Vote Labour/Conservative - vote John Smith"

(OK in that case you're voting Labour). Some ballot papers don't name the candidates' parties, as in Britain until 1968, and some US elections today.

Populist regimes usually put the emphasis on their political leader rather than the party, and when he's not running personally they use Advertising by Association on their candidates.

A different version of this trope is to have the character be an independent, even though non-affiliation in most Western democracies (especially those with proportional representation, where seats in Parliament are doled out by how many votes a political party has gotten) is fairly rare - even the United States, which does not hand out Congressional seats by party, at the moment only has two Senators who are officially independents (Bernie Sanders and Angus King), both of whom caucus with the Democratic Party (and both from New England, funnily enough), and no independent members of the House of Representatives (ever since Justin Amash (MI-03), an ex-Republican who broke with the party for various reasons decided to join the Libertarians) or independent governors. Although county and lower levels of government tend to avoid this.