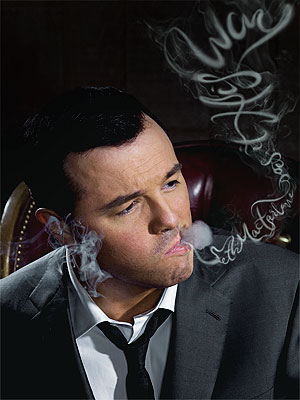 "Oh hi there. You scared the crap out of me."

Seth Woodbury MacFarlane (born October 26, 1973 in Kent, Connecticut) is an American actor, animator, writer, producer, director, comedian, and singer. He is best known as the creator of the animated sitcoms Family Guy, American Dad!, and The Cleveland Show, and is the director of the films Ted, Ted 2, and A Million Ways to Die in the West (which he also stars in). Seth grew up in New England and went to school for animation at the Rhode Island School of Design. His professor sent a copy of his senior project (The Life of Larry) to Hanna-Barbera, who gave him his first job out of school.

After spending a few years at HB, writing/animating for shows like Johnny Bravo, Dexter's Laboratory and Cow and Chicken, he made a sequel to The Life of Larry. Titled Larry & Steve, it featured a middle-aged guy, Larry, and his intellectual, anthropomorphic dog, Steve. Think Family Guy if the show just focused on Peter and Brian and was, for all intents and purposes, a children's cartoon with the occasional Parental Bonus jokes and mild sexual innuendo (read: a typical cartoon from the 1990s, or an in-house program from Cartoon Network).

After Cartoon Network aired the short, FOX contacted Seth about creating a pilot about the characters, which would later become Family Guy. Originally, Seth was hired to do cartoon shorts for their Saturday Night Live-esque sketch show, MADtv, but plans fell through for that, so instead, they gave him a budget of $50,000 and 6 months, and the rest is history.

Family Guy had a bumpy start — not just with content issues, but with timeslots and ratings. The show was cancelled twice (once in 2000 and again in 2002) before becoming a cult hit thanks to cable and DVD releases. The show, as of 2005, has been revived and, for better or worse, is now one of FOX's most valuable current franchises (next to The Simpsons and American Idol).

Seth is also a talented voice actor, providing the voices of four main characters on Family Guy (Peter, Brian, Stewie and Quagmire), three on American Dad (Stan, Roger, and Greg Corbin, the gay newscaster), two on The Cleveland Show (Tim the Bear [until season four, when Jess Harnell took over] and Dr. Fist [until season three, when Tom Kenny took over for one episode, and Bryan Cranston during the fourth season]) and many additional voices. He also voiced several characters in Robot Chicken, a sketch comedy show created by his Family Guy castmate Seth Green. He made a short foray into feature-length film when he voiced Johann Krauss in Hellboy II: The Golden Army. He's also had some bit parts on live-action television, appearing in Star Trek: Enterprise, Gilmore Girls, The War at Home (on the episode "I Wash My Hands of You," where Hillary — the Bratty Teenage Daughter — dates a 33-year-old), FlashForward (2009). But he always returns to animation and comedy. He's also a musician, singer and composer, whose work often appears on his shows (particularly Family Guy, which has a lot of memorable musical moments, like Shipoopi from "Patriot Games," A Bag of Weed from "Episode 420," The Fellas at the Freakin' FCC from "PTV," and You've Got a Lot to See from "Brian Wallows and Peter Swallows").

Seth has won a couple of Emmy Awards for Voice-over Work and Musical Composition. Hugely successful (To the point of becoming the highest paid writer/producer in TV history), but does have a sizable number of detractors, including Moral Guardians who find his humor to be disgusting and offensive, and dyed-in-the-wool Simpsons and South Park fans who think he's a cynical, marginally-talented hack who ripped off jokes and stories wholesale from those two shows and padded them with meaningless jokes that don't go anywhere or have any plot relevance.

Announced in 2010 that he is developing a live-action/CG hybrid feature film which was released summer 2012 named Ted where he voiced a talking teddy bear owned by a loser male lead trying to get through life. Ted got generally favorable reviews and was a huge box office hit. His second film, a comedy western called A Million Ways to Die in the West was released on May 30, 2014. A sequel to Ted, titled Ted 2, was released on June 26, 2015.

Hosted the season 38 premiere episode of Saturday Night Live and the 85th Academy Awards. No, really.

MacFarlane also voiced a henpecked husband named Ben on The Simpsons season 24 finale "Dangers on a Train" and appeared as Peter Griffin etc all in the crossover episode "The Simpsons Guy".

He is the executive producer for Cosmos: A Spacetime Odyssey, hosted by Neil deGrasse Tyson. However that makes sense. This indirectly led to his next project—The Orville, a live action Science Fiction series that affectionately parodies the Star Trek franchise, with MacFarlane himself playing the ship's captain.

In an odd twist of fate, MacFarlane was scheduled to fly on one of the planes that hit the World Trade Center, but missed his flight due to a hangover and his agent screwing up his flight plan. He decided to wait for another flight, until he saw the news footage of the World Trade Center being destroyed and realized that that could have been him (in an even odder twist, his Ted co-star Mark Wahlberg was also supposed to be on that very same flight). He vowed never to make 9/11 jokes on his shows because of this, but, after a while, the vow was broken and some slipped through. (American Dad! was originally created as a reflection of the post-9/11 world, which was rife with overzealous patriotism, the desperate need to be safe [even if it means encroaching on others' rights], and claims that the media and the government is paralyzing people into fearing for their lives.)

His sister, Rachael MacFarlane is also a voice actor and Seth's co-star on American Dad!. No relation to Todd McFarlane.