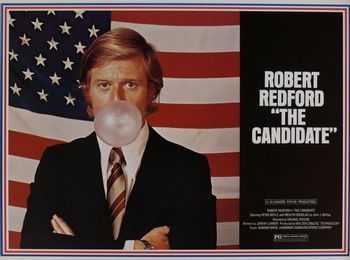 For a better way—Bill McKay
"What do we do now?"
—Bill McKay
Advertisement:

The Candidate is a 1972 comedy-drama film directed by Michael Ritchie, starring Robert Redford and Peter Boyle.

Political campaign specialist Marvin Lucas (Boyle) recruits Bill McKay (Redford) to run for a U.S. Senate seat in California as a Democrat against incumbent Republican Crocker Jarmon (Don Porter). Bill is a lawyer and left-wing legal activist who happens to be the son of popular former governor John J. McKay (Melvyn Douglas). Bill is reluctant to run a campaign that would force him to abandon his principles, but Lucas reassures him that he won't have to abandon his principles because he doesn't have a shot at winning—Lucas even goes so far as to write the promise "YOU LOSE" on a matchbook. Since Bill doesn't have a prayer, he can say what he wants and raise awareness of liberal issues.

However, after the campaign gets off to a slow start and polling indicates that Bill will not only lose but get blown out, Lucas starts urging him to moderate his views to appeal more to swing voters. This starts to work, not only closing the gap between Bill and Sen. Jarmon, but attracting Bill's previously uninterested father into backing his campaign. As Bill's underdog campaign looks more and more like it has a chance, he must make hard choices about how much to compromise himself and what he really believes in.