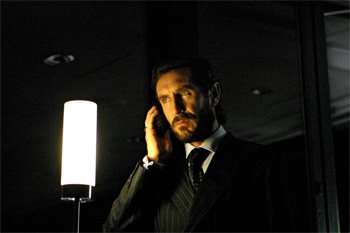 from the director
Advertisement:

A ten-minute short written and directed by Duncan Wellaway, Always Crashing in the Same Car (2007) stars Richard E. Grant and Paul McGann and is to date the only project to reunite them since cult classic Withnail & I (released twenty years earlier by the same production company, HandMade Films).

James Booth (Grant) is under a lot of pressure from a vague international crisis of some kind, and to make matters worse he's feuding with his uppity advisor Bill Mackinnon (McGann). After storming out of a midnight meeting and driving off into the city, he makes a mistake that shifts the balance of power very firmly in Bill's favour. Tense phone calls and desperate cover-ups ensue.

Always Crashing in The Same Car contains examples of: