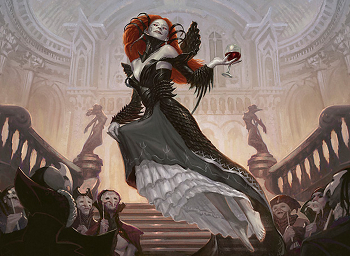 Well, this makes worshiping at her feet easier.
"Once I have embraced my powers, I knew that Vorador was correct. We are gods - dark gods - and it our duty to thin the herd!"
Kain, in one of the two endings in Blood Omen: Legacy of Kain
Advertisement:

When you've got a large group of intelligent predators, there's usually someone they have to answer to. With vampires, this is usually a queen or a king. Often, all the vampires in the world are descended from them. They sometimes come with spouse, though it's becoming more rare in recent years.

They're almost always the most powerful of their kind, because they have to have kept their throne somehow. If not, he or she almost certainly has the loyalty of those who are, or can control the minds of their progeny.

Dracula is a popular choice, as are Biblical baddies like Lilith and Cain. Often in fiction, when a vampire turns a person into one of them, the new vampire is subservient to the creator, resulting in a sort of hierarchical family tree of vampires owing their allegiance back to the originator, who rules them all. A common variant has it that destroying a given vampire reverts all those turned by him back to human (or just kills them).

You will do what they say, or face dire consequences. Because after all, doesn’t a parent know what's best for their children?

Kingdoms they rule over will probably be Überwald

Sometimes crosses over into Cute Monster Girl for the queens.

A Sub-Trope of Our Vampires Are Different, Hive Queen, Evil Matriarch and God Save Us from the Queen!.

Bloody Mary is the queen of the vampires that prowl New Marais, resurrected by Cole MacGrath's blood and out for revenge against the humans.

Bloody Mary is the queen of the vampires that prowl New Marais, resurrected by Cole MacGrath's blood and out for revenge against the humans.