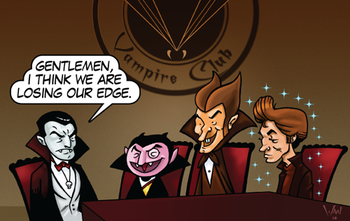 A group of select vampires who make decisions, police other vampires, and uphold The Masquerade. They usually wear elegant and civilized outfits.

By the end of the 20th Century, the standard horror tropes of lone, disorganized vampires didn't make much sense. The rise of telecommunications and computers also coincided with the vampires getting their act together and forming tight-knit societies, often European in origin. They serve as a kind of a ruling organ which operates mostly behind the scenes, sometimes in conjunction with human agents or other vampire clans. With so many vampires cooperating with one another, the likelihood of world domination is increasingly obligatory; yet Vampire councils are uniformly against taking such action. As a consequence, there is often one council member who objects to all the secrecy, only to be swiftly slapped down.