Killed to Uphold the Masquerade 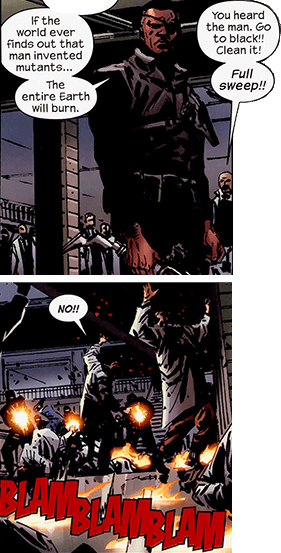 The World Is Not Ready for some information to be known...
"I'm here because you can see me, simple as that."
— Cameron Hunter, Shadownova
Advertisement:

So, our Intrepid Reporter has discovered the world behind the masquerade, and she refuses to uphold it, destroy it, join it or get Laser-Guided Amnesia, and in fact will go public with her discovery.

The heroes (or villains, if it's the bad guys who are upholding the masquerade) will try to reason, plead, and maybe even threaten her into not going public. She may not care that, once exposed, those hidden by the masquerade will be persecuted and killed (which may be her goal if many of those protected are evil), or that The World Is Not Ready to know, or that it would generally just be a Bad IdeaTM .

The heroes (or villains) then get to work. Try to destroy the evidence? She made multiple off-site backups. Bribery? She either doesn't want money or figures the exposé will make her richer than what they offer. Blackmail? She doesn't care about her reputation ruined as long as she ruins theirs. Mind-Control Device? She wears mirrored glasses.

She has to die now.

In a Crapsack World her death is pretty much guaranteed; good characters/players will probably agonize over this choice but ultimately do what they must and Shoot the Dog. If the author wants to let the heroes off the hook, then Villainous Rescue may come along and kill her for the heroes so they can avoid doing the deed, but not the guilt over having almost done it/strongly considered it. Often, this involves either faked suicide, suspicious accident or messy murder.

If the author is particular about not wanting blood on anyone's hands, the character may simply get Put on a Bus or suffer a fatal accident through their own fault. (Not that the readers won't know what is up.) The heroes may still feel guilty for covering up the details surrounding her death.

Expect her death to either go completely unnoticed... or call the attention of a Hunter of Monsters in a later episode/story.

May be an Elephant in the Living Room if this or Easy Amnesia are never brought up in a series with the masquerade, especially one managed by good guys. A leading cause of The Masquerade Will Kill Your Dating Life.

A notable aversion would be when the reporter experiences something so horrific at the hands of the villain note (Such as Eldritch Abominations singing terribly as a FORM OF TORTURE, or a Doomsday Device capable of killing anywhere from 1-101% of the population.) that she comes to believe that the masquerade is necessary, and from then on helps the heroes to maintain it.

Contrast Safety in Muggles. Can potentially lead to Can't Stop the Signal.