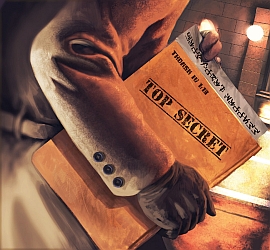 T. Rex: I'd love to have a secret I could take to my grave!
Dromiceiomimus: Technically, there's all sorts of things you've never told people that will be lost when you die: what you had for breakfast this morning, for instance.
T. Rex: Yeah, but those are CRAPPY secrets! I'm talking about the GOOD stuff: buried treasure, world-changing revelations, that sort of thing!
— Dinosaur Comics, #3830

Did Espionage Tropes send you? Shhh... Don't tell anyone you found this place. This index is a secret to everybody. It's here that we index all the darkest secrets stored on TV Tropes. If you're looking for secret personalities look over at More Than Meets the Eye. If it's there, don't look for it here. For more mysteries see Mystery Tropes, don't bother with the Infauxmation Desk. And remember, be careful. The Index Is Watching You.


All individuals handling this information are required to protect it from unauthorized disclosure in the interest of the international security of TV Tropes.
See also: