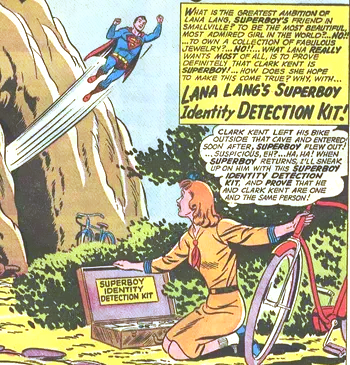 A standard fixture of the Fantastic Comedy: whenever the series concept requires that an extraordinary person Masquerade as ordinary, there is one person around who suspects them, or has already learned about their secret (usually not every little detail, but enough to see them for what they really are). This character is always the Only Sane Man — Clark Kenting, fortunately, still works for everyone else — making this character only look crazy if they try to expose the protagonist.

If the character himself is not convinced that they are just hallucinating — and some of them are — they become set on getting proof to show everyone else that they were right all along — only to fail every time. Sometimes the neighbor fancies herself an Amateur Sleuth, going so far as to spy and snoop whenever visiting the "undercover" character. They may even set traps to expose the character's Masquerade. Usually though they have no idea — or care — about the trouble they are getting themselves into around the protagonist, so typically the hero will need to save them when they get too involved. Some have a perfectly logical (though often villainous) motivation, but other seem not to have considered the question "What would happen if you did expose your neighbor's secret, and would you really benefit from this?"

This character is usually a normal human in the vicinity from their civil life who has noticed that something is odd or amiss with them — a Nosy Neighbor or a Snooping Little Kid. If the masquerading subject is in school, the character is quite likely to be a teacher at that school, or a School Newspaper News Hound. If the show is a Work Com, it can be a co-worker, often a rival or the subject's immediate manager.

Occasionally, the character will have had an obsession with the supernatural before they meet the protagonist. They may be a danger that comes from the outside — Hunter of Monsters, an Inspector Javert or the Intrepid Reporter.

Often there is a character around who could give weight to their claims, an authority to present their proof to who views with bemused indifference their ranting insistence that something is strange about the main character — a husband if the character is the neighbour, the school principal if they are a teacher, a more senior manager in a Work Com. Sometimes a sidekick whom they drag into helping them — usually an underling, such as a school janitor if or an intern — is also present.