Series / I Am Frankie 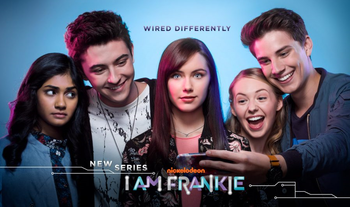 Things are getting real.
Advertisement:

I Am Frankie was a live-action teen drama/comedy/science-fiction series which premiered on Nickelodeon in the fall of 2017. The series stars Alex Hook as a teenage android girl named Frankie, whose inventor and "mother" absconded with her when she learned the company she worked for intended to sell her to a rogue government agency that wanted to weaponize her design. Hiding in plain sight (two towns over from her old lab), Dr. Gaines and her family try to live normal lives and keep Frankie off the radar...by enrolling her in the local high school and praying nobody finds out her secret. Of course, with Gaines's old boss hunting for the android, a rival scientist out to win a prestigious award at any costs, and the rigors of teen drama in a high school environment, Frankie is constantly in danger of being exposed.

The series was based on the Colombian telenovela Yo soy Franky, which was created by Argentinian author Marcela Citterio and produced by TeleVideo for Nickelodeon's Latin American counterpart, also named Nickelodeon. It was produced by Nickelodeon alongside Paradiso Pictures, the production company of executive producer Eric Gaunaurd.

I Am ... Detecting These Tropes Within The Context Of This Series:

I Am ... Finished Listing Tropes.