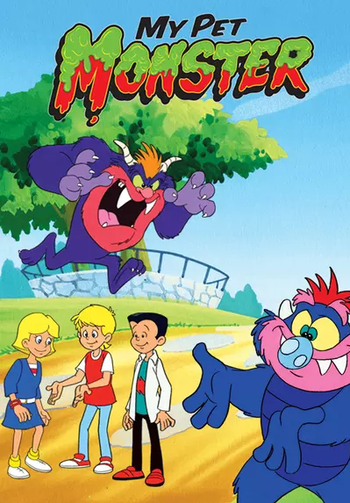 The Animated Adaptation of the popular 1986 plush toy of the same name, My Pet Monster is a 1987 Merchandise-Driven animated series from Nelvana that ran for a single season of 13 episodes on ABC. It was preceded in 1986 by a direct-to-video movie, also titled My Pet Monster (which has its own page on this wiki).

The cartoon follows a different plot than the movie. Whereas the movie had its protagonist transform into the eponymous monster whenever hungry after being cursed by a statue, the show has the kid (named Max, just like in the movie) as a separate character from the monster (named, umm, Monster), who is indeed his pet and best friend. Max has a magic pair of handcuffs that turn Monster into a plush when placed on his arms. He uses this to keep Monster's existence a secret from everyone else, with the only ones in on the truth being his older sister Jill and their friend Chuckie. The main adversaries of the show are Beastur, a bigger, scarier monster who hates light and seeks to take Monster back to Monsterland, and Mr. Hinkle, Max's neighbor who is very certain that Max is hiding something from him.

The show was short-lived but proved a modest success, boosting sales of the toys significantly. Some of the actors in the cartoon were also in the 1986 movie, such as Alyson Court and Colin Fox, although they often took on different roles. There was also a series of kids' books from Golden Books Publishing that shared a similar premise to the cartoon, with the main difference being that Monster lived in a cave under Max's house.

Nelvana has every episode on their Retro Rerun Youtube channel.