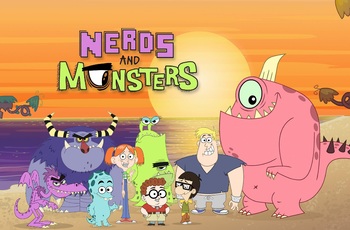 Nerds and Monsters is Canadian animated series produced by Slap Happy Cartoons Inc. for YTV. It premiered on March 12, 2014 and ended on August 27, 2016, running for a total of 40 episodes over 2 seasons. It was created by Josh Mepham, Kathy Antonsen Rocchio, Greg Sullivan, and Vito Viscomi

The show is set on an island populated by monsters where three nerdy kids named Dudley Squat, Irwin Chang-stein, and Becky Hooger, as well as a dumb football linebacker named Stan Grissle, are stranded in what can basically be called YTV's version of Gilligan's Island. The plots feature the Nerds (and Stan, who is considered a Nerd by the monster denizens regardless)note in fact the Monsters think "Nerd" is literally the name of the kids' species, having never seen a human before simply making the best of it on the island, while surviving the plans of the monsters' chieftain Zarg, who sees the Nerds as a threat to his people's way of life. Though the nerds and the monsters generally don't get along, there is an exception in Zarg's nephew and heir to the throne, Lyle, a kind and gentle monster child who prefers the Nerd's company and doesn't see himself as a monster.

Dude, what the hell did you drink?!

Dude, what the hell did you drink?!