Western Animation / Over the Garden Wall 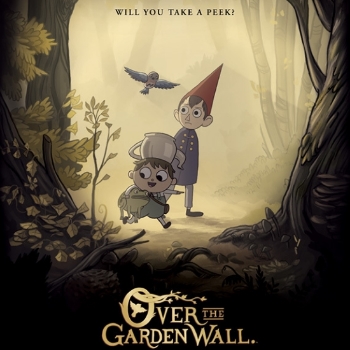 "Led through the mist by the milk-light of moon
All that was lost is revealed
Our long bygone burdens, mere echoes of the spring
But where have we come, and where shall we end?
If dreams can't come true, then why not pretend?"
— "Into the Unknown"
Advertisement:

Over the Garden Wall is an Emmy Award-winning ten-part animated mystery/comedy Mini Series created by Patrick McHale, best known for his work on The Marvelous Misadventures of Flapjack and Adventure Time. Airing in a Two Shorts format from November 3 to November 7, 2014, the show is Cartoon Network's first original mini-series, and based on the 2013 animated short film Tome of the Unknown

The story follows two half-brothers, Wirt and Gregory, who find themselves lost in a dark and mysterious forest called The Unknown, where "long forgotten stories are revealed to those who travel through the wood". In their quest to return home, they are helped by a talking bluebird named Beatrice and are stalked by a shadowy creature known only as "The Beast".

On September 8th, 2015, the series was released on DVD, with bonus features including the original pilot, creator commentary, a music-only track called the "Composer's Cut", and animatics. The series can be watched on various streaming services, including HBO Max and Amazon Prime. You can also occasionally catch it on television every year around Halloween. Meanwhile, the show's complete soundtrack would see proper release on September 19, 2017, following a limited edition vinyl-only release in July 2016, though many of the songs had been available to listen to on Cartoon Network's YouTube channel since the mini-series' premiere.

The series would go on to have a number of tie-in comics by KaBOOM! Comics. The page for those can be found here.

Be aware of spoilers on this page or subpages.

Over the Garden Wall provides examples of:

Example of:
The Old North Wind