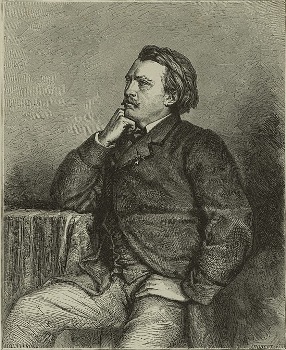 "One of the most acclaimed and successful artists of the nineteenth century was also one of the inventors of comic books, and arguably the originator of much of the vocabulary of the graphic narrative. That was Gustave Doré."
— Doug Harvey, "Sandow Birk's Fast-Food Inferno"
Advertisement:

Paul Gustave Louis Christophe Doré (6 January 1832 – 23 January 1883) was a French graphical artist, painter, printmaker, sculptor and illustrator, though he is most famous for the last profession. He used wood engraving to illustrate scenes from various iconic pieces of world literature, such as the poems of Lord Byron, Gargantua and Pantagruel, The Bible, The Divine Comedy, The Tempest, the fairy tales of Charles Perrault, The Adventures Of Baron Munchausen, Don Quixote, Paradise Lost, The Rime of the Ancient Mariner, Idylls of the King, Orlando Furioso and The Raven. Many of these drawings have become the definitive visualizations of these classic stories and are about as iconic as the tales themselves.

Doré also made drawings of realistic events, such as the fatal accident on the first ascent of the Matterhorn in 1865[1]

◊ and realistic pictures of the poor neighborhoods of London in London: A Pilgrimage, but he was at his best when he could illustrate Fantasy stories and let his imagination run wild. His work has influenced countless artists, from Walt Disney to Terry Gilliam. Many stories in a fairy tale setting take their inspiration from Doré's illustrations for Charles Perrault's fairy tales.