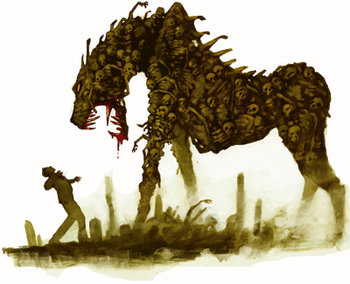 It's about to add one more.
"The Unburied are formed from human corpses that were flung together into mass graves without a proper burial. This hideous amalgamation of bodies decomposes together into one being, bound by some foul magic. For all my knowledge, I could only flee from it... and I would expect any other sensible person to do the same."
— Abd al-Hazir's notes on the Unburied, Diablo III
Advertisement:

An excellent way to add some horror to a creature or show off how abominable your Eldritch Abomination is. These monsters can be either made of various corpses "glued" together, or just being an amalgamation of random body parts disposed in a casual manner. Sometimes it can be the result of the villain or another creature absorbing their underlings or Devouring the Dragon in order to become much more powerful. Hence it can fit nicely for a One-Winged Angel. Unlike a Flesh Golem (which is likely started as a sort of homage to the Frankenstein Monster), these creatures tend to be "natural" (as in not artificially crafted), or the result of a One-Winged Angel transformation. Very often the result of some disaster (such as The Plague) or atrocity (such as a genocide, or attempt at genocide), and may canonically only result from such circumstances. Can overlap with Genius Loci if the location in question is an Indian Burial Ground or similar (and these examples may be somewhat friendly, if highly unnerving). More rarely, can be the result of a large group (such as an army) who have Unfinished Business in common. An embodiment of the primal fear of losing one's identity. Although it is Older Than Feudalism, this trope became particularly prominent in fiction written after World War II because one of the final elements of The Holocaust was that the Nazis went out of their way to make identification and proper burial of the victims difficult.

A giant skeleton that is made up of other skeletons.

A giant skeleton that is made up of other skeletons.