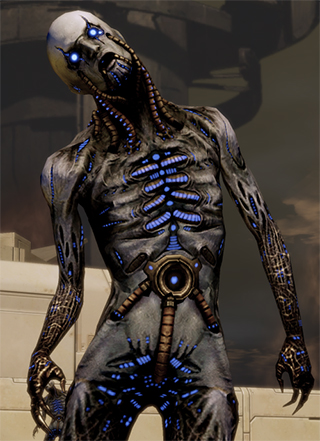 Call them "Husks", if you want to, we all know they're actually cyber-zombies.note They are called Zombies in the game's French version, though. At least they don't want to snack on your processor.
"I was cast into being in winter of 1795, a living corpse without a soul. Stitched, jolted, bludgeoned back to life by a madman."
— Adam, I, Frankenstein
Advertisement:

An Artificial Zombie is what happens when you try to reanimate someone with science (and usually also For Science!), causing them to Come Back Wrong. The good news is that if they go berserk and start consuming human flesh (and they probably will - zombies will be zombies, after all), they have an almost zero percent chance of spreading zombification and creating a Zombie Apocalypse.

This trope is frequently heavily influenced by and may have origins in Mary Shelley's Frankenstein.

Subtrope of Our Zombies Are Different. Compare Frankenstein's Monster and We Can Rebuild Him. See also SkeleBot 9000.